Le Petit Theatre's new season gets off to a whirlwind start with “Nine Lives: A Musical Witness of New Orleans” on August 27, 28 and 29. Its three performances will serve as the theatre's annual "Lagniappe" production, a precursor to "Vanya, Sonia, Masha and Spike," which opens seven days later. 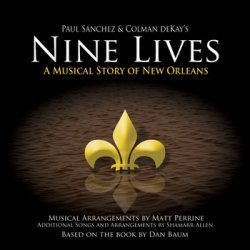 Paul Sanchez’s musical adaptation of Dan Baum’s book, “Nine Lives” has played to critical acclaim locally and in New York and is a fitting way to commemorate the 9th anniversary of Hurricane Katrina. Featuring a cast of 17, “Nine Lives” musically depicts the personal stories of a diverse selection of New Orleanians across the forty years between Hurricanes Betsy and Katrina.

The show's credits are a who's who of New Orleans theatre and music.

Broadway, TV actor (The Good Wife) and new New Orleanian Michael Cerveris coproduces the show along with Rick Duplantier and Roxy Bergeron.  Cerveris heads up a cast that includes Sanchez, who along with composing the music partnered with Colman deKay on lyrics. They join trumpeter Shamarr Allen, recently debuted in the James Brown biopic "Get On Up," who performs and chips in with additional words and music. Finally, New Orleans-based theatre, TV and film actor Bryan Batt is featured in an ensemble that not only includes popular singers Debbie Davis and Robin Barnes but also close to a dozen local musicians.

With a book by Kimberly Kaye and direction by Jim Fitzmorris, “Nine Lives” promises to start the New Orleans theatrical season with a thunderclap.

Le Petit has partnered with the New Orleans Musicians' Clinic (NOMC,) www.nomaf.org,  to raise funds for the nonprofit, which provides comprehensive health care and mental health/social services to local performers. NOMC representatives will be present at each performance with information on its services and how to donate. Nine Lives cast members will "pass the hat" for donations to the clinic after each show.

Just a week later, the popular Broadway comedy  "Vanya and Sonia and Masha and Spike" takes the stage for its New Orleans premiere.  Audiences will laugh out loud at the banter that takes place between three middle-aged siblings. Vanya and Sonia live together in their family's home in Pennsylvania where they are not so much living off the land as they are living off the largess of their sister, Masha, an actress known for her roles in slasher movies. When Masha sweeps in for a visit with her "boy toy" in tow, the sparks fly!

Vanya is hailed for its comedic insights about life and the difficulties of family relationships.  Vanya and Sonia’s (played by Martin Covert and Susan Shumate, respectively) musings about their stations in life are both poignant and hilarious, They are joined by their sister, Masha (played by Cassie Worley), and her boyfriend Spike (played by Jake Wynne-Wilson), Idella Johnson plays a psychic housekeeper and Sophie Amoss is the ingenue-next-door. The result is a show you won’t want to miss! Written by Chrisopher Durang, it won the 2013 Tony Award for Best Play.

"I see 'Vanya and Sonia and Masha and Spike' as a portrait of what we all have in common as humans – the need to be happy, in whatever form that happiness takes, and the often ridiculous and ludicrous things we do to achieve that elusive state," says Director Ron Gural.  "The show is touching, moving and very funny — all at the same time."

Le Petit has partnered with Second Harvest Food Bank. www.no-hunger.org,  to raise funds in support of the organization’s anti-hunger mission, which involves food provision to 300 partner pantries, soup kitchens and community centers, and direct food access to individuals and families in need throughout 23 parishes in south Louisiana – the equivalent of 20 million meals in the last year.  With its member agency network, Second Harvest is the largest anti-hunger entity in the state.