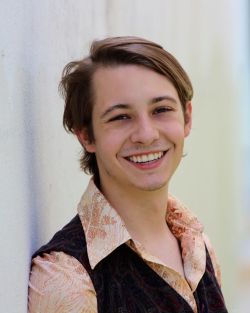 Logan (Herod) is absolutely thrilled to be in his first show at Le Petit Theatre. Prior to Superstar, he was seen as Alfie in One Moon, Two Guvnors at Rivertown Theatre, and Hannibal Lecter in A Christmassacre Story with See 'Em Onstage. His thanks go out to his family and friends for their support, and the cast and crew for having him on board.

LPT: What is is about this show that led you to audition?
LF: I'm a self proclaimed game rock junkie, and after city wide auditions, I got a call back about coming in and auditioning for JCS. My inner Bowie freak squealed at the opportunity, so I came in, did a Hedwig song, now here I am.

LPT: Tell us a little about your character(s).
LF: Herod is delightfully petulant, the epitome of the unimpressed, spoiled, rich kid who's had everything handed to him on a plate. Jesus is less messiah and more new toy for Herod, which makes him entreatingly manipulative and flippant.

LPT: What is the most exciting part of being in a production at Le Petit?
LF: The prestige of it all. To be doing a big name legacy musical onstage with a theatre that has a big name and legacy of it's own.

LPT: How will you celebrate Opening Night?
LF: A dirty, wet martini with capers and tasteful eyeliner.

LPT: What is your New Year's resolution?
LF: To read more plays and sleep in more often.

Thanks Logan!!
Stay tuned for more cast members over the next week and the course of our run!!