Le Petit Theatre, a backstage peek at the ongoing construction

Le Petit Theatre du Vieux Carre board of governors members Kathleen Van Horn and Leon Contavesprie led a hard hat tour of the ongoing top-to-bottom renovation at New Orleans' oldest playhouse on Saturday (Feb. 23) morning. The $1.3 million project is the final step in a plan to ensure the continued survival of the old theater that has occupied its corner adjacent to Jackson Square since 1922.

Considering the clatter and clutter of the ongoing construction, it’s a leap of faith to imagine the theater will be ready in April as hoped. But Van Horn said that many of the remaining tasks, such as installing carpet and painting are comparatively short-term projects.

“A lot of things are going to be happening pretty quickly in the next two or three weeks,” she said in a subsequent telephone interview. “… I don’t think there’s anything with a really long lead time to do.”

And after the construction work is finished, there will still be a moving-in period during which all of the systems will be tested and furniture and portable equipment put in place. However long the final transformation takes, the improvements that Van Horn and Contavesprie pointed out as we wandered the dusty site seem worth the wait.

Superficially, Le Petit patrons will find the old 365-seat theater much as they remember it -- with a few exceptions. The twin vestibules that flank the stage and are sometimes used during productions will remain in place. But a pair of faux theater boxes attached to the walls have been removed. They were merely props from a bygone production, Van Horn explained. The old French Quarter-esque balcony rail is still in place, though the former control booth is gone, replaced by a state-of-the-art upgrade. No balcony seats were sacrificed to add the new booth, Van Horn said. Most of the ground floor seats have been removed for cleaning – lending the place a cavernous feel at present. And the interior has been repainted, providing added brightness. Woodwork and light sconces will be installed before opening.

Most of the renovations, Van Horn pointed out, will remain unseen from the seats. The major refurbishment is the product of a daring plan by the board of governors that involved sacrificing more than half of the historic property to permanently save the rest.

The punch of the 2008 economic crash eventually staggered most New Orleans non-profit arts institutions. Le Petit was one of the first to feel the impact. Unable to make ends meet in 2009, the theater underwent management changes and the cancellation of a season of shows before the board of governors took drastic action by proposing the sale of 60 percent of the theater’s French Quarter property to the Dickie Brennan Restaurant Group for $3 million. Not everyone approved of the plan, but after a period of public outcry from devoted traditionalists and a dramatic membership vote, the sale went through at the end of 2011. 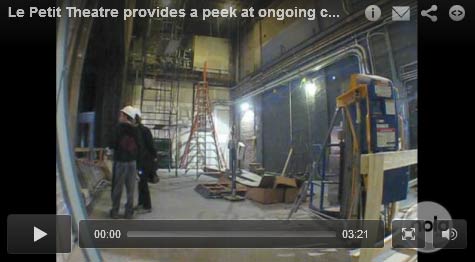 Playgoers and diners will enter through the same lobby, turning right for comedy and drama or left for trout and oysters.
Tour Le Petit Theatre du Vieux Carre with board member Bryan Batt Actor Bryan Batt, a member of the board of governors of Le Petit Theatre du Vieux Carre, gave a whirlwind tour of the French Quarter playhouse on June 9, 2011, pointing out those areas that may be sold to the Dickie Brennan Restaurant Group and those areas that would remain part of the theater.

“There was some dissatisfaction, especially on the part of a small section of the theater community that a part of the building would be given up,” Van Horn said. But, she added, there was a larger if less vocal group of theater subscribers and onlookers that supported “how tirelessly this board worked to save this entity.”

Proponents predict that the strategy will result in a symbiotic partnership between New Orleans' oldest entertainment venue and one of its most respected restaurateurs. Both the food service side and the theatrical sides of the joint enterprise hoped to be open by Super Bowl Sunday in February, but work at the French Quarter site took longer than originally expected.

Van Horn said the delay was simply a matter of unforeseen construction complications in the property that combined sections spanning the 19th and mid-twentieth centuries.

“You think you know a property, but especially with a historic property, especially a conglomeration of several buildings, you don’t know what’s in there,” Van Horn said. In addition, she said, the logistics of carrying out major construction on a hairpin turn in a narrow Vieux Carre street slowed things down considerably.

“There are some challenges to working deep in the French Quarter that wouldn’t happen uptown or out in the suburbs,” she said.

Playgoers and diners will enter through a shared lobby, turning right for comedy and drama or left for trout and oysters. Between plays, the courtyard will be used for outdoor restaurant seating. During plays it will not, Van Horn said. New restrooms will be available to patrons on the restaurant side of the courtyard. There’s no need for concern, Van Horn said, the koi carp that once plied the fountain in the courtyard have been moved to a board member's pond for safe keeping during construction.

Visually, the courtyard will be altered in two ways. A new balcony has been blended into the second story of the restaurant side, to allow waiters covered access to the upper dining rooms. And an awning will reach from the main lobby to the side entrance of the theater for handicapped access. The awning will cover the path to the restrooms as well.

Enhanced handicapped access is one of the subtle improvements to the old playhouse that could go unnoticed by most visitors. Other invisible upgrades include a renovation of the outdated electrical system, the addition of a new stage floor, plus stage air conditioning and heating, a second exit staircase from the balcony to the lobby and improved lighting, Van Horn said.

“We want to emphasize that the theater now will be up to code, compliant with all city codes and ADA (Americans with Disabilities Act) codes,” she said.

The antiquated and faulty fly system – a trapeze of ropes and cables used to raise and drop scenery -- has been removed, she said. The theater board hopes to raise money for a new one sometime in the future. In the mean time, Van Horn said, the theater will choose productions that do not require especially elaborate set changes.

Two major modifications are under way backstage. Since the old dressing rooms have been converted to dining rooms on the restaurant side, a tall, little-used storage area called the stack room has been converted into a two-story dressing room and office area. Skylights invite natural illumination in to the windowless office that can double as a green room or third dressing room if needed. Van Horn pointed out the irregular antique bricks in a hallway leading to the new dressing rooms -- evidence of the great age of the original building.

Shows were previously loaded into Le Petit from the restaurant side. Now that that is impossible, a side alleyway to the right of the main entrance has been enhanced to allow easier access.

The restaurant elevator now occupies the space that held the stairs to the orchestra pit, so an L-shaped stairway was cut into the stage floor to gain underground access. Van Horn said the stairs are an inevitable inconvenience that has to be worked around during some productions. But, she said, the stairs can be covered when the pit isn’t in use.

Actors have long been protected from tumbling off of the stage and into the open Le Petit orchestra pit by a net. But in the future, Van Horn said, when the theater is not presenting musical productions, the pit will be sealed over by a system of custom inserts that will extend the stage several feet toward the audience. Ideally, the orchestra pit can double as an educational and rehearsal area, Van Horn said.

Asked how she thinks Le Petit patrons, both doubters and devotees, will react to the $1.3 million facelift, Van Horn said: “I can’t imagine that they will be anything but very delighted and pleasantly surprised.”

This story was updated with more details and quotes roughly five hours after original publication. Look for a tour and description of the Brennan's Tableau at Le Petit restaurant construction later this week.

By Doug MacCash, NOLA.com | The Times-Picayune